Good morning everyone, yesterday I received the dreaded Schedule Change email from American Airlines and was hoping the change would be minor.  I am flying to Chicago in mid October for the Chicago Seminars and picked the American Airlines flights that had the best arrival and departure times.  I would land in mid afternoon in Chicago on Friday and then depart Sunday evening after the Chicago Seminars were over.  Here is my original itinerary that was booked in April.

In the Schedule Change email, my 9:35am outbound flight was moved up 20 minutes, so I would be landing in Chicago 25 minutes earlier.  That is great for me so I can get to the Chicago Seminars a little earlier.  The bad news is that my 5:10pm departure flight was moved to 1:58pm.  A 3 hour and 12 minute change is not going to work for me, since I would miss the end of the Chicago Seminars.  I needed a later flight. 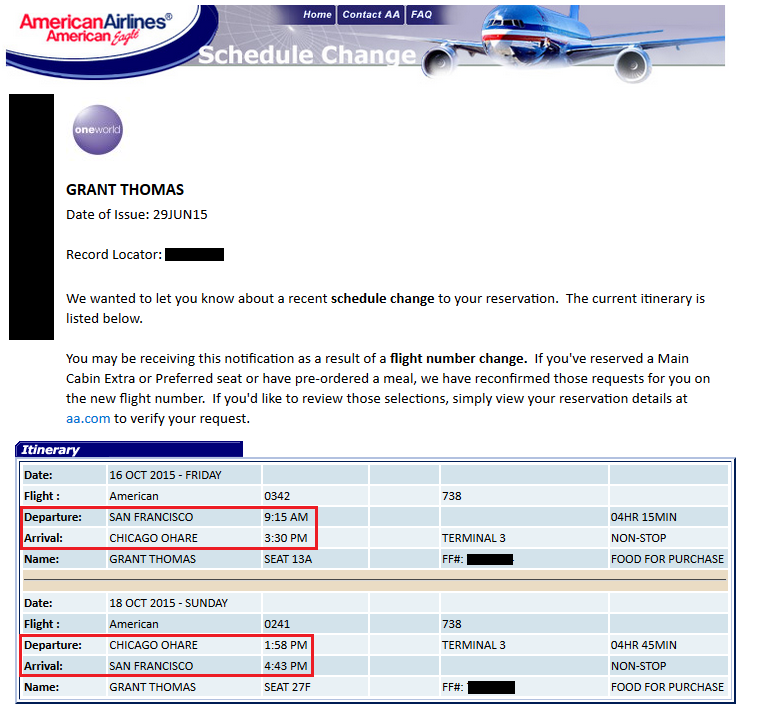 For anyone who has ever tweeted American Airlines, you probably know that they have one of the best social media teams of all travel providers (hotels and airlines included).  Since I sent American Airlines a Direct Message (DM) in the past, I quickly searched on the ITA Matrix App (called OnTheFly) and found an American Airlines flight leaving Chicago at 5:05pm.  I took a screenshot and sent it to them along with my record locator.  1 hour and 40 minutes later, my request was completed and I was rebooked on the 5:05pm flight. There is something quite awesome about spending 2 minutes taking screenshots and sending a few tweets to get your issue resolved without ever speaking with a human on the phone. Shortly after sending out the above tweet, I received the new American Airlines confirmation email with the new flight time. In closing, I am a huge fan of social media (especially Twitter) for resolving issues.  If you tweet a company during normal business hours (Monday-Friday 7am to 5pm PT), you will get a response within a few minutes or hours.  The social media teams are very empowered and can usually resolve your issue by themselves.  If not, they will send you a DM and ask for more information.  If they cannot resolve your issue, they will usually have their supervisor call you to help you out.  I’ve resolved issues with a few airlines, Staples, CVS, and a few restaurants via Twitter.  The thing to remember is to be nice.  No matter how angry or annoyed you are with a company, try to be nice.  Nice people get helped faster.

As for the golf cart story, check out Gary @ View from the Wing’s story about how American Airlines picked him up in a golf cart and drove him to his connecting flight just as they were about to close the door.  Not quite a Mercedes Benz or BMW airport chauffeur ride, but I’m sure Gary was happy to make the flight.