Good morning everyone, happy Friday.  I don’t know about you, but I am exhausted.  This (Prime) week has been draining and I am thankful that we made it to the weekend.  I just have a quick post to share about the Synchrony Bank Cathay Pacific Credit Card.  I got this credit card on August 25, 2017 and knew the $95 annual fee was coming right around the corner.  Usually, I like to wait for the annual fee to post, see if I can talk the rep out of charging me for the annual fee or downgrade to a no annual fee card.  I had a bad experience recently where I tried to do that with the TD Bank Aeroplan Credit Card and it was a real headache. Let me explain…

I called TD Bank the day after my statement closed that showed the annual fee.  I asked the rep if she could waive the annual fee (not possible), then I asked if she could downgrade my card to a no annual fee version (also not possible), so I decided to close the card.  I thought all was good until a month later, I received a statement in the mail showing the $95 annual fee, a $35 late payment fee, and a $1.50 interest charge.  Furious, I called TD Bank and told the rep that I closed the card so I should not (and I would not) pay the annual fee and other fees.  She said that since I called after the annual fee posted, she could not reverse the charge.  I complained that that was not correct.  She put me on hold for a few minutes, talked to her supervisor, and then said that all charges were taken care of and no payment was necessary.  Dealing with TD Bank left a bad taste in my mouth and I didn’t want to go through a similar experience with Synchrony Bank, so I decided to close the card before the annual fee posted.  The following day, I received this email from Synchrony Bank with a link to a letter.  What the letter said interested me… In the letter, it plainly said that I could reapply for the same card, but that I could only have 1 account opened in a 12 month period.  There is no mention about when the sign up bonus posted or when the account was closed, just when the account was opened.  So since I was approved for my first Synchrony Bank Cathay Pacific Credit Card on August 25, 2017, it sounded like I could reapply anytime after August 25, 2018.  I plan to wait a few weeks after that period just to be safe.  I am also hopeful that Cathay Pacific will send me a targeted offer to reapply for the card, that would be sweet. 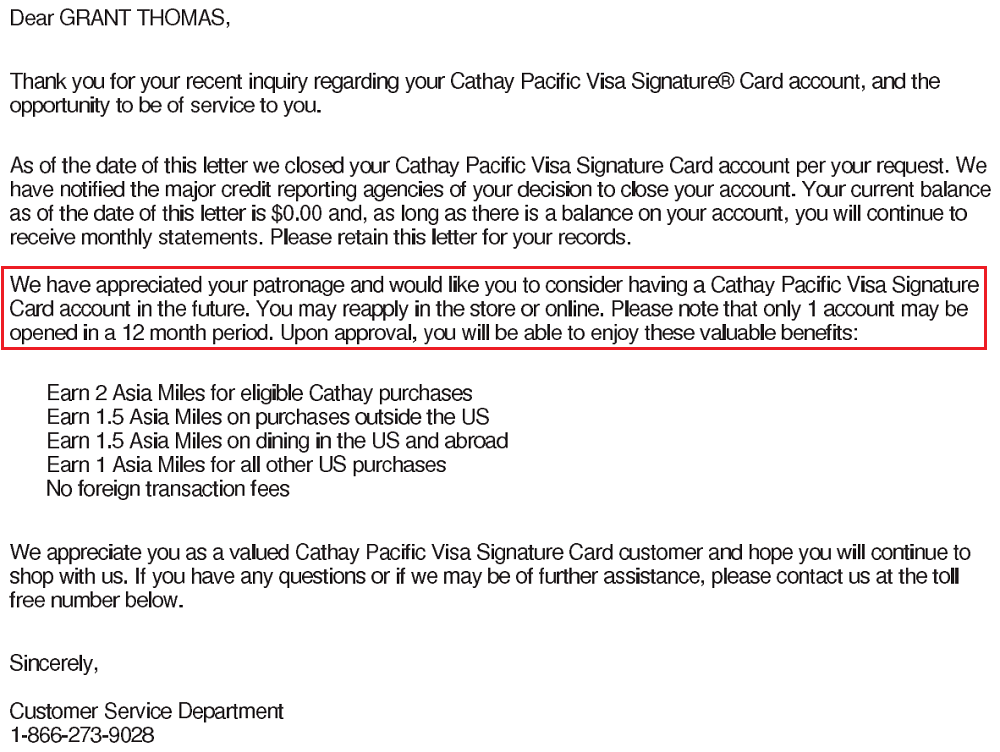 In other Cathay Pacific news, I receive an email regarding a new Cathay Pacific route from Seattle to Hong Kong with 4x weekly service, starting in April 2019.  Here is the complete press release and flight details:

Cathay Pacific will commence a new nonstop service from Seattle-Tacoma International Airport on April 1, 2019, becoming the only airline that will directly link Hong Kong with the fastest-growing city on the West Coast.

Cathay Pacific Chief Executive Officer Rupert Hogg said the Seattle route, which will be operated by the airline’s state-of-the-art Airbus A350-900 aircraft, underscores the airline’s expansion strategy to connect new destinations not otherwise served from Hong Kong–and to link its home, one of the most innovative cities in Asia, with tech hubs the world over.

The Cathay Pacific Group is undergoing a period of unprecedented growth, with nine new destinations having already been announced for launch this year.

Mr Hogg added: “We are very pleased to be introducing Seattle and to provide more convenience and choice to our customers. There are strong business, trade and cultural ties between Hong Kong and Seattle and we believe there will be considerable demand for both business and leisure travel on this new route.

“We have developed a significant presence in the United States and the launch of Seattle not only reaffirms our commitment to the important North American market but also to strengthening Hong Kong’s status as Asia’s largest international aviation hub.”

“We are thrilled to welcome Cathay Pacific, a well-known name that many of our travelers have wanted to see at Sea-Tac Airport,” said Port of Seattle Commissioner Stephanie Bowman. “As the airport serving a dynamic and globally-savvy region, Sea-Tac Airport is proud to expand our international offerings.”

CX 857 will depart Seattle on Monday, Wednesday, Friday and Sunday mornings at 1:05 a.m., arriving in Hong Kong the following day at 5:25 a.m. This early morning arrival allows passengers to connect with every Cathay Pacific flight across Asia—including Singapore, Bangkok, Kuala Lumpur, Jakarta and over 20 gateways in mainland China—without a lengthy layover in Hong Kong. The return flight, CX 858, will depart Hong Kong at 11:55 p.m. (local time) on Tuesday, Thursday, Saturday, and Sunday, arriving in Seattle at 9:00 p.m. (same day).

The airline’s customers will enjoy a superior experience when they fly between Hong Kong and Seattle. Cathay Pacific’s A350-900s are amongst the quietest and most environmentally-friendly aircraft in the sky and are equipped with comfortable seating, an enhanced inflight entertainment system and Wi-Fi connectivity across Business, Premium Economy and Economy classes.

Details of the new Seattle service from April 1, 2019 are as follows (all times local):

Have you churned the Synchrony Bank Cathay Pacific Credit Card?  I would love to hear your data points on application dates.  If you have any questions about the credit card, please leave a comment below.  Have a great weekend everyone!