Since I live in the Bay Area, Oakland Airport is my closest Spirit Airlines airport (I’m not sure why they mention San Francisco since it is 100% in Oakland.  I crossed out San Francisco so no one would get confused.)  They offer non-stop service from Oakland to Chicago (ORD not MDW), Dallas (DFW not DAL), Houston  (IAH not HOU), and Las Vegas (LAS).  I would never want to be on a Spirit Airlines flight that has 2-3 stops, so Myrtle Beach (MYR) and New York City (LGA) are out of the question.  I like the 4 non-stops to Las Vegas, but there are no non-stop flights after 2:32pm.  Come on Spirit, add some evening flights to Vegas!  It is interesting that Spirit Airlines does not fly OAK-LAX, since only Southwest Airlines flies that route. The Spirit Airlines sign up bonus is simple: receive 15,000 miles after your first purchase (similar to the Bank of America Alaska Airlines Credit Card).  If you make a dummy Spirit Airlines booking, you will see an offer on the checkout/payment screen that also includes a $100 statement credit after spending $500 in 3 months.  The $59 annual fee is waived the first year.  So by applying for this credit card, I will get 15,000 Spirit Airlines miles and a $100 statement credit with no minimum spending requirement or annual fee.  Pretty good deal, right? On the denial letters, I like when the credit card company mentions which credit bureau they used and the credit score that was shown. 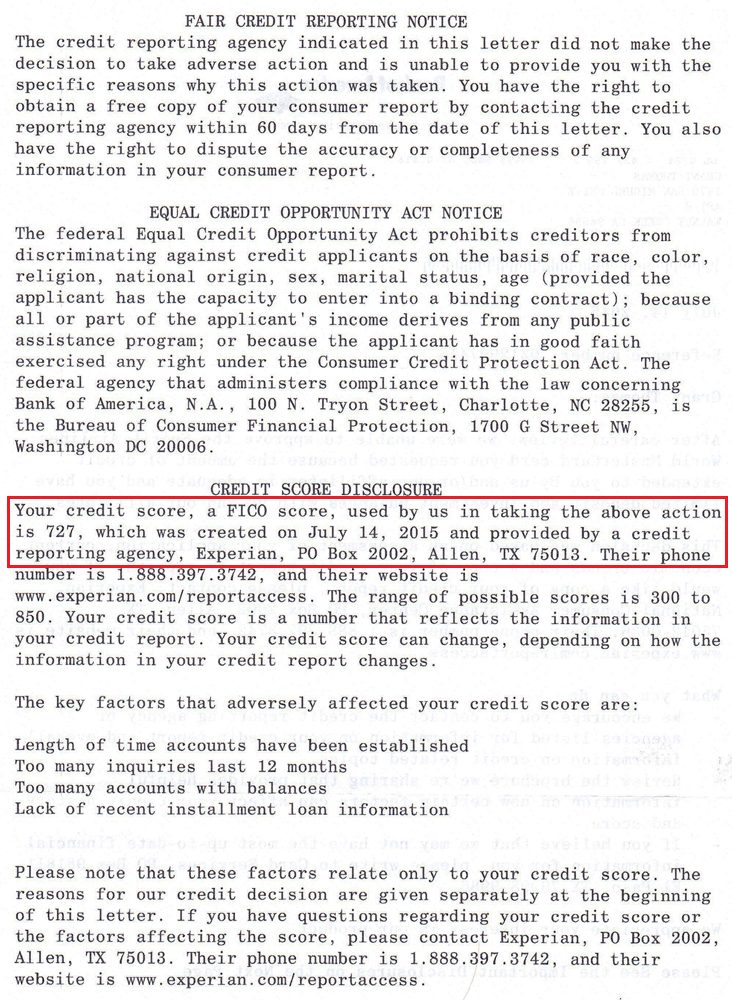 After I received the denial letter, I called the same reconsideration phone number as before and pleaded my case to the credit analyst.  I explained that I did not want any more credit, I only wanted to move credit lines around from existing Bank of America credit cards.  After looking at my accounts, she was about move $1,000 from my recently approved Bank of America Alaska Airlines Credit Card to approve my Bank of America Spirit Airlines Credit Card.  Somehow I ended up with a $5,200 credit line (I’m not sure how the math worked on that one, but I am not complaining).  A few days later, I received my approval letter (dated July 28, 2015). Again, Bank of America posted my Experian credit score from my original application date (July 14).  It’s nice to see that Bank of America did not do another hard pull to view my credit report. I also received a letter from Bank of America (dated July 29, 2015) that my credit card request was approved.  It doesn’t mention the name of the card, just the last 4 digits of the card.  I have not received the card yet.  It would be great if Bank of America would send out the card at the same time as the approval letters.